by llffoundation
Comments are off
blog

Many species of amphibians are in decline across the world, and the Illinois Chorus Frog (Pseudacris illinoensis) is one of them. Illinois Chorus Frogs have faced rapid decline due to habitat loss and road mortality. These frogs overwinter in rare sand prairies and emerge for a few weeks in the spring to breed in ephemeral ponds. The Land Learning Foundation is supporting a Master’s student on their thesis regarding these endangered frogs. She is studying a population of Illinois Chorus Frogs near the Southern Illinois University Edwardsville campus. From March through May she conducted road surveys and pond surveys of the frogs on rainy nights. When she encountered a frog she measured its length and mass, took GPS coordinates, and inserted a Passive Integrated Transponder (PIT) tag. The PIT tag is similar to the microchips placed in pet dogs and cats with an identifying code. This will allow the frog which have already been encountered to be recognized. With this information she will be able to estimate the population size, travel routes, average size, and the age and sex ratios of the frogs. 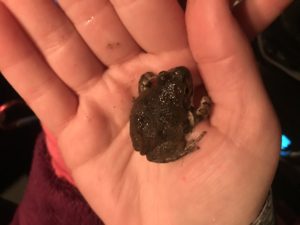